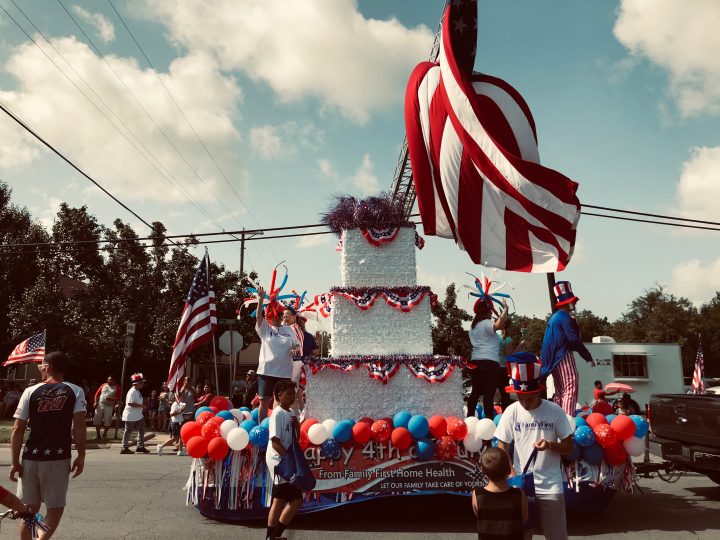 Plans are under way for the annual Park Street Fourth of July parade, which will begin at 10 a.m. Saturday, July 4.

“After weeks of pandemic isolation, we’re excited to be able to celebrate freedom once again on historic Park Street,” said Derek Price, the 2020 parade chairman. “At the same time, we want to follow whatever public health guidelines are in place on that date, so we hope people will be patient and flexible as we work out the details.”

The parade starts at 10 a.m. and proceeds west on Park Street. A slightly longer parade route has been proposed that would turn right on Johnson Street and terminate at Hemphill Street.

“If we use a longer route — just a couple of blocks more than normal — we’ll have more space for viewers to spread out and extra room for the parade traffic to dissipate at the end,” Price said. “For people who want to keep their distance, we think this will make it a bit easier.”

In addition, restrictions may be recommended based on guidance from public health experts.

“We have no way of knowing what the COVID-19 situation will look like on the day of the parade, but we want to take whatever steps make sense to help minimize the spread of viruses in the community,” Price said.

The Greenville Police Department Color Guard will lead the parade, and James Narramore has been designated as Grand Marshal.

Narramore and his wife, Grace, are longtime Park Street residents and have supported the Park Street Historical Association for many years.

Parade participants are asked to line up at 9 a.m. at the east end of Park Street, near the 7th Street turnaround.

There will be a $50 charge for any entrants doing political or commercial advertising. People wishing to advertise in the parade should bring a $50 check payable to the Park Street Historical Association. Those wanting additional information can call Derek Price at 903-269-1260.

The Park Street Historical Association is welcoming church groups, scout troops and community service organizations to enter a float. Antique cars, trucks and tractors, four-wheelers, motorcycles and equestrian entries are likely to be on hand. The association requests everyone decorate appropriately for the occasion featuring red, white and blue decorations.

Spectators are encouraged to honor the flag during the parade by standing, removing hats and paying respect.

Additional information will be available at www.parkstreetgreenville.org.

Dedicated to preserving the history of Greenville, Texas.